I came out about three and a half years ago, and not much later realized that I was butch and probably always had been, even and possibly especially during the two years or so when I tried to grow my hair out and meet more guys and yeah, that. I’ve read about quite a few butches who went through that stage.

And then there was this Facebook quiz that showed up on my feed about two years ago and made me laugh, because, before I came out, I would have scored a perfect zero.

Nowadays, I am clearly much, much more high maintenance. Now, I score a grand total of four points. Yeah, not the hair extensions four points, or hair is dyed+nails are painted four points. Nope. Owns 20+ pairs of shoes.

Given that there was a time in the 1990s when I owned one pair of shoes for work, a pair of sneakers, a pair of snowboots and a pair of either flats or low heels for emergencies such as weddings, it still boggles my mind that I might own more than twenty pairs of shoes.

And I thought I owned only twenty pairs of shoes, including sneakers and boots. Nope. The other day I pulled all of my non-sneaker, non-boot shoes out into the living room to get a good look at what I had.

Pretty much, it came down to short boots, 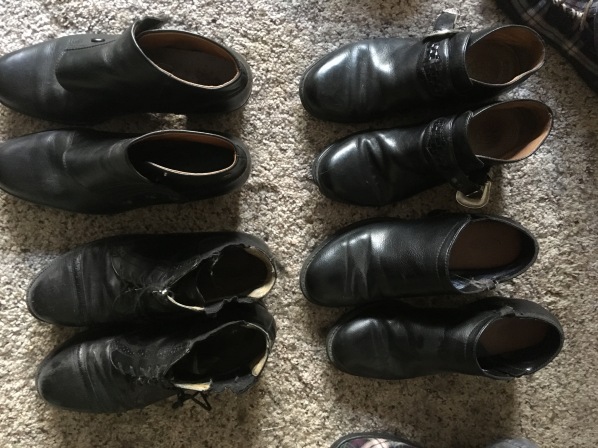 And other exciting colors 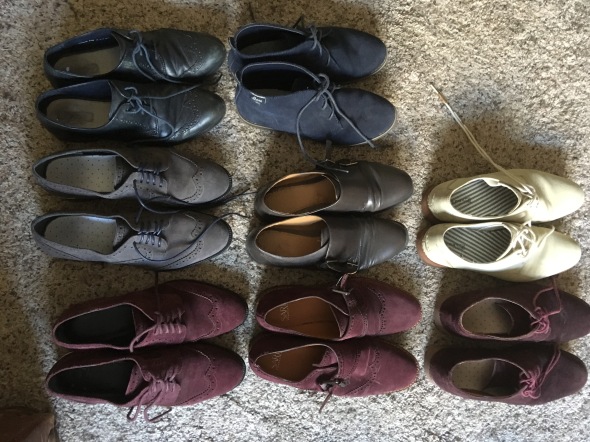 The total came to thirty pairs. Who the hell owns thirty pairs of shoes? And when I think that most of them are made of leather, and I do know the problems with the leather industry, how did I manage to accumulate all of these? Or, to put it differently, how did I manage to eat this particular dinosaur? Sigh. One piece at a time. Okay, maybe a pair of pieces at a time. And that means, I suppose, that I can also reduce the excess one pair at a time, right?

To be fair, there is a real reason that I ended up with this many pairs of shoes, and if I look at the shoes I’ve got, the answer is pretty clear. Once I recognized and embraced myself as more of a masculine kinda girl, I wanted to express that through my clothes: blazers, cufflinks, vests, shoes.

117 things. Gone. But we know that nature abhors a vacuum. (I know my cat does.) Apparently I filled it. With, among other things, shoes.

So this week, as part of a new purge, I tried on all thirty pairs of shoes and managed to winnow it down by one-sixth. One pair, the black oxfords, were simply too small. I was able to give them to a smaller friend who has been pulling together a working wardrobe for her post-graduate degree present. The others, all bought online even though I know that I have narrow heels and usually can’t wear shoes that don’t tie in some way but I was trying to have better girl shoes… Yeah, that didn’t work.

So now, I am 58 pieces of clothing down (including five pairs of shoes), in part because I just ordered two vests and yeah, another pair of shoes. I never meant to be a horrible consumeristic person, or as my sister called me a while back, God forbid, “a clothes horse.”

There is an episode on the TV series Bones, in which the forensic anthropologist, Dr. Brennan identifies a decomposed body by the surgery the woman had on her feet to shorten her toes to fit some fancy-shmancy ridiculously high-heeled shoes for her wedding. The pathologist, Dr. Saroyan, not known for her taste in sensible shoes herself, says, “Women do love their shoes!” When I saw this episode, I said, “No, we don’t! That’s stereotypical! Harrumph!”

I also find it ridiculous that a show with high-powered women who spend a lot of time on their feet generally show them wearing at least three-inch heels. Somehow I doubt it. Sure they might keep a set in the bottom drawer for meetings, but given that these main characters are medical professionals, they would know exactly how each inch of heel puts that much more pressure on the ball of the foot, stretches the Achilles tendon and does other nasty stuff to knees, legs and back. Sure, up to a point they can make a woman’s calves look good and the shift to the legs also helps foreground her breasts (stand on your tiptoes and see what shifts). But standing or, for example, walking in them? Nope!

I am thinking of this now because I just bought a few pairs of shoes and rediscovered others that were at the back of my closet. 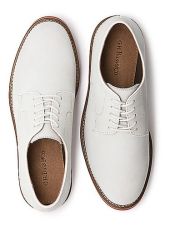 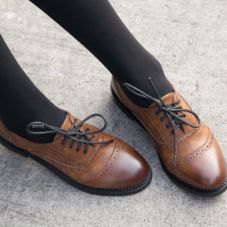 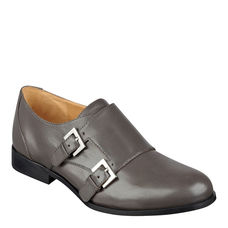 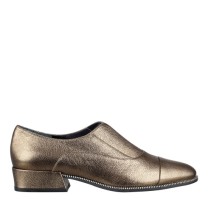 They both look utterly terrific, but when I tried the Oxfords on, they were unbelievably uncomfortable: rigid and unforgiving. The boots were just too narrow for my feet. Sending them back.

Harrumph. By sweet Jesus in his dusty Birkenstocks, I did not come to this side of the rainbow bridge to wear uncomfortable shoes!